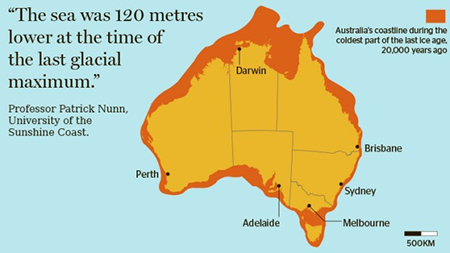 The sea level around Australia was much lower during the last ice age.
Graphic: Monique Westermann

Long before Botany Bay became Sydney's main cargo seaport, and long before Captain Cook directed the HMS Endeavour to sail through its shallow waters, the iconic cove was a wetland used by the first Australians.

Around this time, about 20,000 years ago, huge ice sheets locked up vast quantities of the Earth's water, making the coastline of every continent, including Australia, significantly lower than it is today.

"The sea was 120 metres lower at the time of the last glacial maximum," says Professor Patrick Nunn, a geologist and climate scientist at the University of the Sunshine Coast.

As the globe warmed, melting much of the ice, the sea rose in fits and starts, at times a few metres a century, at other times by only a few millimetres.

By about 7000 years ago the sea reached the level where it laps the shore today.

Geologists and climate researchers know where sea level was at a particular time with remarkable precision from sediments cored off continental shelves.

However, it seems science was not the only witness to this dramatic event.

Details of life before and after this significant sea rise, which flooded areas around the Australian coast that were previously dry land, were recorded in the oral histories of the continent's Indigenous people.

Nunn and his linguist colleague Dr Nick Reid have collected more than a dozen stories from different clans around the country that refer to the inundation of the coast.

The story of Botany Bay refers to a clan that split in two. The elders headed inland, while the younger members remained on the then swampy land near the coast.

When the elders later returned they found Botany Bay had become an ocean inlet and Georges River and Cooks River were two separate rivers, according to botanist Frances Bodkin, a Dharawal elder who was told the story by her mother.

Given there have been no major changes in sea level since this time, Nunn and Reid suggest this story and others are at least 7000 years old and may have been preserved for several hundred generations.

"It's almost impossible to believe," says Reid, an associate professor at the University of New England in Armidale.

There's the story about the once-dry Port Phillip Bay being a place kangaroos grazed. It has been recorded by three independent sources. Other histories refer to offshore islands on the west coast like Rottnest, Carnac and Garden being part of the mainland between 7500 and 9000 years ago, when the sea level was about eight metres lower than it is now.

A hint about how these stories may have survived for so long is the practice of storytelling used by contemporary Aboriginal clans.

Reid says clans have very explicit mechanisms for teaching people to tell oral histories, as well as tasking others to ensure the orator tells stories accurately.

For instance, when children are told tales by their parents, they are tasked with quizzing the details and cross-checking them with their grandparents.

"The beauty of the relationship is that it is cross-generational and that provides a kind of scaffolding that's very successful at keeping stories accurate, not succumbing to a Chinese whispers effect." This feature of oral tradition appears to be specific to Australia.

Reid says most of the stories were recorded by "well-meaning white people who interacted with Aboriginal people in the early days of the colony" such as missionaries and government surveyors.

Academic historians have often scoffed at oral traditions, regarding them as fables or legends devoid of facts.

"Anglo-Australians have really ignored what Aboriginal people may know about Australia for quite a long time. We've come in and superimposed Western science," says Nunn.

Only recently have scientists realised these stories may contribute to our understanding of natural phenomena, says Nunn.

The pair are keen to track down more version of stories as well as new tales.