Aboriginal Women’s Fishing in New South Wales
This publication was written by Alex Roberts, with input from Kath Schilling.
(http://www.environment.nsw.gov.au/resources/cultureheritage/10131abwfish.pdf) 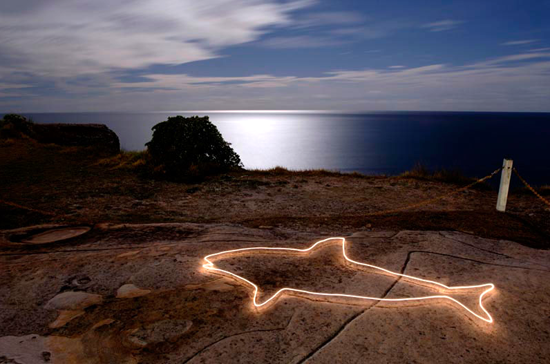 The Aboriginal custom of finger tip removal – 'malgun', observed in coastal New South Wales, especially in the Sydney region – was a source of curiosity for colonial observers. Initially the British were unsure why some women and girls in coastal areas were missing the first two joints of the little finger on the left hand. In the absence of an obvious explanation some colonists misinterpreted the custom and created their own explanations for the practice.

It was now first observed by the Governor that the women in general had lost two joints from the little finger of the left hand. As these appeared to be all married women, he at first conjectured this privation to be part of the marriage ceremony; but going afterwards into a hut where were several women and children, he saw a girl of five or six years of age whose left hand was thus mutilated; and at the same time an old woman, and another who appeared to have had children, on both of whom all the fingers were perfect. Several instances were afterwards observed of women with child, and of others that were evidently wives, who had not lost the two joints, and of children from whom they had been cut. Whatever be the occasion of this mutilation, it is performed on females only.

Although Phillip initially assumed that finger tip removal was indicative of marriage, he was inquisitive enough to realise that his assumption was ill-founded. Other colonists, however, were less discerning and less willing to let go of their own cultural assumptions about which acts were important enough to be symbolised by permanent bodily markings. By the time John Turnbull visited Sydney in 1800, most white settlers realised that malgun was related to fishing. Turnbull describes the practice:

Whilst the female child is in its infancy, they deprive it of the two first joints of the little finger of the right hand; the operation being effected by obstructing the circulation by means of a tight ligature; the dismembered part is thrown into the sea, that the child may be hereafter fortunate in fishing.

This custom of amputating a small portion of the little finger of young girls to mark them out as fishers was also practiced further north in the Port Stephens region, and was observed into the 1860s. William Scott, who grew up in Port Stephens and counted the ‘lads of the tribe’ as his ‘playfellows’, Scottexplains how this practice was related to fishing:

An Aboriginal woman, Fanny, who was a servant of our family for many years, was in her girlhood days dedicated to the art of fishing. When quite young, a ligature was tied about the first joint of her left finger very tightly, and being left there for a considerable time, the top portion mortified and, in time, fell off. This was carefully secured, taken out into the bay, and, with great solemnity, committed to the deep. The belief was that the fish would eat this part of the girl’s finger, and would ever, thereafter, be attracted to the rest of the hand from which it had come.

According to Scott, at least one woman from each tribe was usually dedicated to fishing through the malgun operation. These women were not only defined as fishers, but also as the makers of fishing lines so that ‘the virtue accruing from her innate powers over fish’ were ‘communicated to the lines she made.’32 Scott had no doubts that the malgun operation was effective, saying that Fanny ‘was indeed a wonderfully lucky fisher.’

Turnbull and Scott’s accounts of malgun demonstrate that women were in fact the designated fishers in Aboriginal societies in coastal New South Wales in the eighteenth and nineteenth centuries. This directly challenges the stereotypical notion that men with spears were primarily responsible for fishing. Women were largely responsible for fishing in coastal New South Wales, and were designated as such both symbolically through the absence of two joints of their little finger, and practically, as this joint removal was said to aid fishing ability.