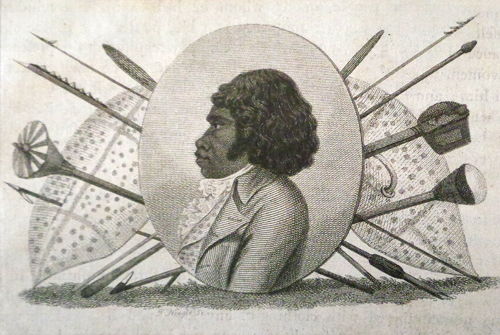 The Sydney Aboriginal name for this place was 'Djubuguli'. After their arrival at Sydney Cove in 1788, the British observed that the area was a gathering place for Aboriginal people. In 1790 Governor Phillip had a small hut built for his friend Bennelong on the site where the Opera House now stands. Thereafter the place became known as Bennelong Point. Well after all traces of Bennelong and his hut had been erased from this site, Circular Quay continued to be a gathering place for Aboriginal people. Throughout the 1800s, the Government boat sheds which stood on the opposite bank from Bennelong Point (between the current sites of the Museum of Contemporary Art and the Sydney Cove Terminal) were used as a semi-permanent camping place. Aboriginal people used these camps as a base from which to travel up and down the New South Wales coast. They were finally 'moved on' in 1881 when authorities closed down the camps.

A year after their arrival at Sydney Cove, the British had made little headway in establishing communication between themselves and the local Aboriginal population. In a desparate attempt to rectify this situation, the colonists abducted a young man, Arabanoo, whom they hoped to teach English and train as a go-between. Arabanoo died in the smallpox epidemic that decimated the Aboriginal population of Sydney during April and May 1789. In Novemeber that year, two other men, Bennelong of the Wangal clan and Cadigal man Colebee, were kidnapped while they fished at Manly Cove. Colebee escaped some days later, but Bennelong stayed a further six months and developed a close relationship with Governor Phillip.

In a sign of their deep affection for each other, Bennelong and Governor Phillip exchanged names, Bennelong calling Phillip 'Biyanga' (Father), and the Governor in turn addressing Bennelong as 'Durung' (Son). Phillip was missing the same upper front tooth which was removed from the mouths of young men during the tooth avulsion ceremonies practiced by Aboriginal groups of Sydney. There has been some speculation that the absence of this tooth was a factor in Phillip being adopted by Bennelong and indeed other Aboriginal people, into such a position of respect.

After he escaped from settlement in May 1790, Bennelong maintained a close relationship with Phillip and continued to play a mediating role between the colonists and Aboriginal communities. He and his wives were reported to have been regular visitors at Government House - eating at Phillip's table, being ferried about in his boats and receiving regular gifts of food and supplies.

When Phillip returned to London in 1793, Bennelong went with him and was paraded in front of the King and other prominent people. He was accomapnied by another Aboriginal man, Yemmurrawannie, who later became the first Aboriginal person to die in London. While in London, Bennelong reportedly took on many of the customs of his hosts, in particular a taste for fine clothes and alcohol. He returned to Sydney in 1795. During this absence, his hut on Bennelong Point was demolished and replaced by other structures. His wife took up with another man. After his return to Sydney, Bennelong lived a life caught between two worlds. He passed away in 1813 as a lonely man with a broken spirit.

Bennelong told Phillip he was the traditional owner of Mamila, or Goat Island as it is known today. Yet he was burried in the garden of James Squire's Inn on the banks of Parramatta River at Kissing Point.