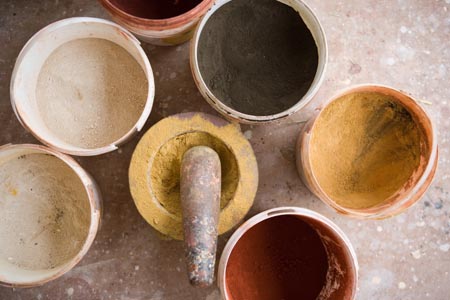 The earliest Indigenous art was paintings or engravings on boulders or on the walls of rock shelters and caves. Red ochre was being used for painting at least 30,000 years ago in central Australia. Indigenous people relate these very old images to the actions of Dreaming beings. The images are sacred because they show a continuing ancestral presence.

There are three broad styles of rock art which reflect the regional styles. The first is engraved geometric figures such as circles, concentric circles, arcs, animal tracks and dots. These can be found in Central Australia as well as Tasmania, the Kimberleys and areas of Victoria. The second is the simple figurative style of painted or engraved silhouettes of human and animal forms, which are found in Queensland. The third is complex figurative paintings depict detailed figures, such as x-ray art that shows internal organs of humans and animals, which are especially common to Arnhem Land and surrounding areas.

One of the largest collections of rock art is in the heritage listed Dampier Archipelago in Western Australia, where the rock engravings are thought to number in the millions.