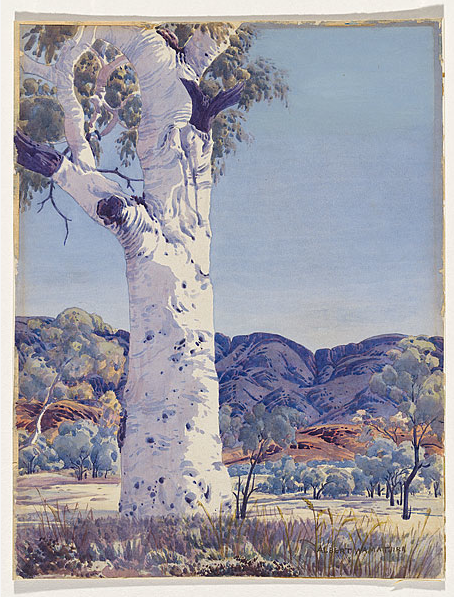 Albert Namatjira is one of Australia's best-known Aboriginal artists, and the first Aboriginal painter to receive international recognition for his art. A Western style painter, he spent part of his youth at the Hermannsburg Lutheran Mission, about 130 kilometres west of Alice Springs, Northern Territory, and was introduced to watercolour painting by a non-Aboriginal artist, Rex Batterbee, in the 1930s.

Namatjira's landscape paintings are predominantly of areas he knew throughout his life in the tribal land of Western Aranda, Central Australia. His work gave rise to the Hermannsburg School of landscape painting.

His art captured the vibrant colours of the Western MacDonnell and Krichauff Ranges, the tributaries of Ellery Creek and Hugh River, and in many works the broad bed of the Finke River that ran through the heart of his tribal land.

In 1957 Namatjira was one of the first Aborigines to be granted Australian citizenship. Although he died aged 57 disenchanted with white society, Namatjira did much to change the prevailing negative view of Aborigines at the time. He also paved the way for the Papunya art movement, which emerged a decade after his death.