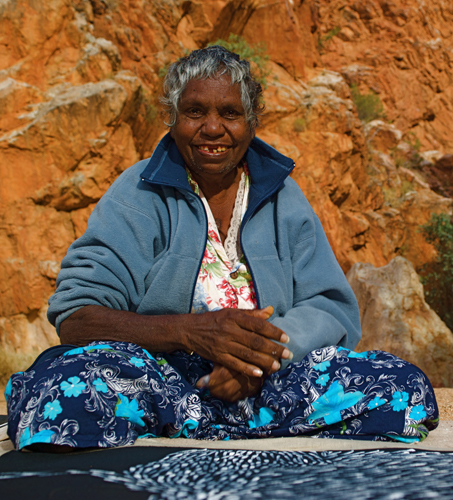 Gloria Petyarre was born near Atnangkere Soakage in 1945. She lived a very traditional lifestyle as a child, before moving to one of the established settlements in Utopia, NT.

Gloria was a founding member of the Utopia Women’s Batik Group. She merged traditional iconography and onto the new medium of silk and in doing so created a new art style. Gloria is a very dynamic and innovative artist and this has placed her in a unique position within the Contemporary Aboriginal art movement.

Throughout her career Gloria has been an ambassador for the art of her region and in 1999 Gloria won the prestigious Wynne Landscape Prize, which reaffirmed her position as one of the most talented and renowned contemporary Aboriginal artists.

Gloria paints aspects of traditional women’s Ceremony. Her main Dreaming that she paints is the ‘Bush Medicine Plant’.

The ‘Bush Medicine Plant’ refers to a species of acacia, which is used as part of traditional indigenous healing. Women collect leaves from this plant and boil them to extract the resin. The resin is then mixed with kangaroo fat, which results in a paste. This paste is used to heal bites, wounds, cuts and rashes and can also be used as an insect repellent. The leaves from the plant can also be brewed to make tea and can be used to alleviate symptoms of the common flu.

Gloria paints the leaves of the acacia plant, and her depiction of the ‘Bush Medicine Plant’ has become iconic. Typically she depicts the leaf of the plant in an upward movement. She will either paint a delicate, fine leaf or more recently she has been developing her style and paints a bolder, larger sized leaf.

Gloria also paints the subject of ‘ Awelye’, which is body painting for women’s Ceremony. Awelye is derived from the traditional practice of Aboriginal women ‘Painting Up’ their bodies for Ceremony. These designs are painted onto the chest, breasts, arms and thighs.