From McCulloch & McCulloch's 'Contemporary Aboriginal Art: The Complete Guide', explains the beginings of the Aboriginal art movement in the chapter The Living Art of Aboriginal Australia.

Geoffrey Bardon arrived in the Central Desert government settlement of Papunya in 1971, as Bardon later described, the community was demoralised and divisive, depressed and lacking in either cohesion or direction.

Fascinated by children’s drawings in the sand, Bardon sought explanations of their meanings and suggested to the children that they re-create the drawings in the classroom in watercolour on paper. Then the elders painted a mural on the school walls on the encouragement of Bardon, using traditional iconography. The power of this new medium enthused almost the entire community. Soon numerous others, mainly men, were painting on just about any flat surface to hand – most often boards but also packing cases and occasionally corrugated iron sheets. Paints were first crushed ochres, then when available, postercolours, oils, house paint and finally acrylic. The designs were at first figurative and often graphically iconographic and became increasingly complex and more expressive when the custom of overlaying the imagery with veils of dots was developed by artists such as Johnny Warangkula Tjupurrula, Tim Leura Tjapaltjarri, Shorty Lungkarda Tjungurrayi and others.

For a few months the painting developed in the community without significant outside awareness. Then in August 1971 Kaapa Tjampitjinpa won equal first prize at the Caltex Art Award in Alice Springs. By that time over 20 artists (all male) were painting: Geoffrey Bardon estimated that in the first 18 months at least 1000 works were painted.

By 1972 when Peter Fannin, the first designated art adviser, was appointed, the number of painters had doubled; during the 1980s there were over 200. In 1972, the Papunya artists also established their own cooperative, Papunya Tula Artists Pty Ltd, the first Aboriginal-owned arts centre in Australia.

Although in the early years painting was prolific, sustaining the movement was far from easy. Richard (Dick) Kimber, a long time Alice Springs resident, community worker, teacher and writer who has had a close relationship with the Papunya painting movement from its inception, described those days:

'The first painting I saw was one of Kaapa’s (Tjampitjinpa) and the instant impact on me was amazing. I immediately wrote to Bob Edwards (then curator of anthropology at the South Australian Museum, who became the first director of the Aboriginal Arts Board of the Australia Council). If credit is due to anyone for keeping Papunya painting going at that stage it ought to go to Bob Edwards. Bob had had a love of Aboriginal art especially rock paintings for years and he came out here and looked at the art and the community and organised funding for the administrator.

Peter Fannin’s family bought some, and other workers at the community did too as well as some other locals, but generally up to about 1976 you couldn’t give them away. Art in Alice itself was very much focused towards the Namatjira style (of realist watercolours). This other stuff looked too different to be taken seriously at first. And we tried writing to all Sydney dealers of greatest repute and the curators all over and no-one was interested in the new art.'

Most state art galleries and the new National Gallery of Australia were reluctant to acquire works of such difference. However local interest was stronger. The Museum and the Art Gallery of the Northern Territory through its director Colin Jack-Hinton and curator Margie West bought significant quantities of early work (MAGNTs collection contains some of the gems of early Papunya art). Local residents and visitors also bought a substantial number of works which have subsequently appeared in auctions and have often fetched record prices.

Kaapa Tjampitjinpa’s co-winning of the Caltex Art Award in 1971 says Dick Kimber, was a very early recognition of the significance of the new painting. ‘Then,’ he says:

'There were a few newspaper articles about what was happening at Papunya and both the Australian Museum and Museum of Victoria bought some. Pat Hogan at the Stuart Art Centre at the caravan park she and her husband owned, showed quite a few. She also had people in there painting with the finest brushes (or ends of brushes) she could supply so the works that came from that source were usually good.

Then the late Andrew Crocker, an English barrister and quite a flamboyant character arrived as art coordinator. He got on the phone and rang every wealthy person he could think of saying “ I think you ought to have a collection of his work” He was the one who got Robert Holmes a` Court interested. Holmes a` Court was one of the most high profile people in Australia and suddenly his collection from Papunya was photographed in Vogue and major newspapers. Suddenly art from Papunya was a highly desirable thing to be collecting.' 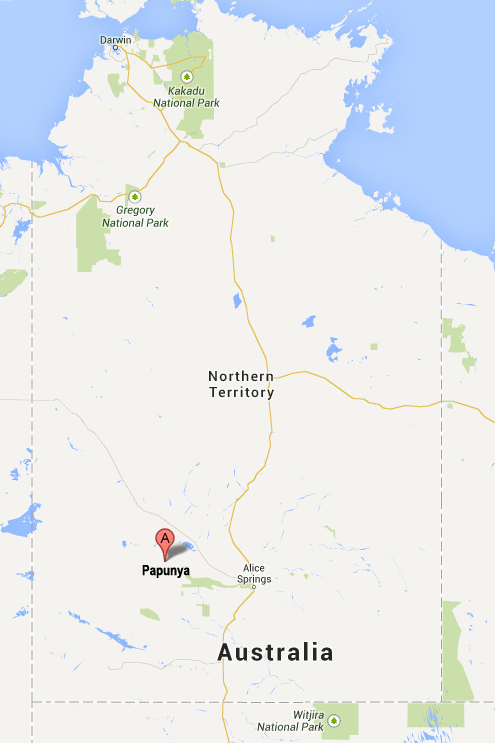