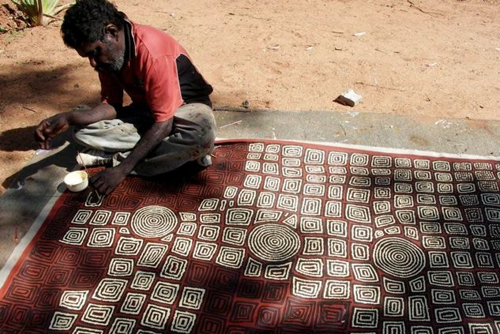 Thomas Tjapaltjarri is brother of well-known painters Warlimpirrnga Tjapaltjarri and Walala Tjapaltjarri. He was born early 1964, east of Kiwirrkura in the Gibson Desert. He and his family lived a very isolated lifestyle, having no contact with western people or modern civilization. They successfully lived in the harsh Australian desert, west of Lake Mackay. Thomas was part of a small group of Pintupi people that included his brothers, sisters and aunts, Thomas’ arrival in Kiwirrkura in 1984 made international headlines of the discovery as the ‘Last of the Nomads’.

Similarly to his brothers, Thomas paints in a bold yet minimal style and is likewise capturing international attention and acclaim. Thomas paints the sacred ‘Tingari – Men’s Creation Dreaming’ which is associated with the many sacred sites of his Country – such as Wilkinkarra, Maruwa, Tarrku, Njami and Yarrawangu, to name a few. These are locations of significance, which include rock holes, sandhills, sacred mountains and water soakages in the Gibson Desert.

‘Tingari - Men’s Creation Dreaming’ is a story of creation from the Western Desert region. It portrays the ideology of ancestral spirits who journeyed far and wide through the Western Desert, performing site-specific sacred rituals to form new land and law as we see it today. In Tingari, there are two separate representations; one specifically relates to Men’s Business and Creation while the other specifically relates to Women’s Business and Ceremony. Exclusively to Thomas, the Tingari Dreaming is a ‘Men’s Creation Dreaming’, the shapes depicted are not only Men’s Creation, but also represent the journey and navigation to these sacred sites and areas known to the Pintupi men. Further detail of this Dreaming is not shared with the ‘uninitiated’. These stories are Dreaming stories known and shared in detail only by initiated Pintupi men.

Thomas can be said to use shapes and symbolic lines in a more organic way than his younger brother, Walala, to represent the sacred ‘Tingari - Men’s Creation Dreaming’. Thomas’s style boldly features rectangles and detailed dot-work set against stark, black backgrounds. In his paintings, Thomas accurately ‘maps’ out the sacred ritual sites in a topographical layout. By doing so, he achieves a flow of movement that portrays the idea of linking patterns and separating paths in which the ancestral spirits used in the time of Creation. Through painting, Thomas bridges the gap and builds the relationship between the present and the Dreamtime.