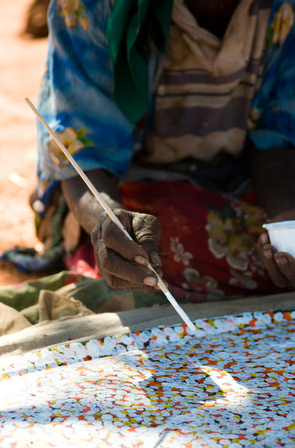 Australian Indigenous art is the oldest ongoing tradition of art in the world. Initial forms of artistic Aboriginal expression were rock carvings, body painting and ground designs, which date back more than 30,000 years.

The quality and variety of Australian Indigenous art produced today reflects the richness and diversity of Indigenous culture and the distinct differences between tribes, languages, dialects and geographic landscapes. Art has always been an important part of Aboriginal life, connecting past and present, the people and the land, and the supernatural and reality.

Indigenous art ranges across a wide variety of mediums from works on paper and canvas to fibre and glass. Introduced media such as printmaking, fabric printing, ceramics and glassware now complement traditional arts and crafts.

The story of the way these art forms are produced runs parallel to the history and experiences of the artists themselves. It reflects customary trading patterns, a struggle for survival and the influence of governments and churches.

A market in Indigenous artefacts has existed between Indigenous and non-Indigenous peoples since they first came into contact. After colonisation, artefact sales occurred on a widespread basis throughout south-eastern Australia.

The prominence of Indigenous art is due in part to the motivation and considerable effort of Aboriginal and Torres Strait Islander artists, particularly painters, who have played a major role in introducing both Australia and the rest of the world to Australia's Indigenous cultures. The Western Desert Art Movement has come to be seen as one of the most significant art movements of the 20th century.