A stand-alone collection of Aboriginal art has gone under the hammer for the first time at a major auction house in London, with some pieces attracting world-record prices.

The 75 high-quality and rare pieces of Aboriginal art on offer at Sotheby's auction house went for a total of more than $2 million.

Most of the artworks belonged to billionaire Dutch collector Thomas Vroom, and could only be sold because they predated Australia's protectionist laws that are this year under review. 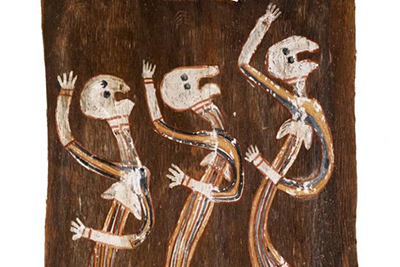 Sotheby's senior consultant from Australia, Tim Klingender, the specialist in charge of the sale, said he was thrilled with the results.

"It was a bit of a risk to put a sale of Aboriginal art outside Australia and I always wondered whether Australian bidders would participate in the sale," he said.

"I wondered whether there was enough global interest to support it but I was absolutely astounded by the results and the market and the bidding.

"And indeed where every lot sent ended up was in America, Europe, Russia and in England, so it was a fantastic result."

He said it was outstanding to sell a diverse amount of "historically significant, unusual Indigenous Australian art".

"The sales filled with early bark paintings, it was filled with Aboriginal shields and in particular, really not your typical Aboriginal art that one sees on the market," he said.

"It was great to see that it was embraced by such a broad community."

The auction included Wanjina paintings, an art form representing ancestral beings originating in the sea and the sky, by notable artists Alec Mingelmanganu and Jack Karedada.

Mr Klingender said paintings of Wanjina from the 1970s were very rare and had little commercial production.

"These paintings had a great power and quality to them so they attracted a lot of buyers," he said.

"We saw two of them sell for close to $200,000 each for paintings on bark — that's a world-record price for a bark painting.

"Indeed both of them smashed the previous world record price for any bark painting, the previous record being about $100,000." 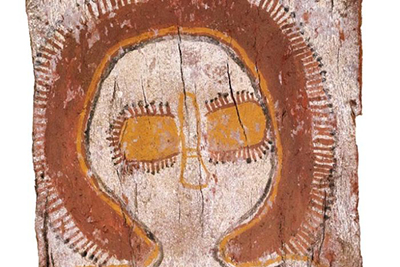 Sotheby's wants to create an annual Aboriginal art auction in London, working against the trend of the shrinking of the international market for Indigenous works due to laws that heavily restrict exports.

The laws are meant to protect objects of cultural heritage but is heavily criticised by collectors.

The Movable of Cultural Heritage Act is currently under a review led by cultural property law expert Shane Simpson, who is due to report to the Arts Minister by September 30 this year.

"We're hoping the reviews will become sensible because right now ... they just quite plainly don't work and they've really stymied the Aboriginal art market," he said.

"We just had a terrible trickle-down effect back to the community art level and it really has stopped the international art market growing and that's really what fuels interest in Australia, in the field and interest in contemporary art work as well."

Mr Klingender said the auction showed the level of interest in Aboriginal art outside of Australia, with a lot of the works being bought by collectors all over the world.

"Aboriginal art should, if it's not secret, sacred or the most important thing on the planet, it should be able flow freely just like any other art, and I'm sure Indigenous people feel that too," he said.